The bush is its own world. Beneath the canopy of forest leaves, thick trunks springing upwards, creating a maze of horizontal lines. The lushness of the landscape is contrasted almost immediately, stumbling upon a patch of burnt bark and scorched earth. Trees on one side of the road breath a sigh of relief as their cousins across the dirt track are licked by flames and scorching heat, only separated by the barest of margins.

These images are part of my childhood, they come directly from the idealised imagery of a little girl, sitting in the backseat of her parent’s car, watching out the open window as the landscape rushed by. Sunday picnics in the forest were a highlight of the week back then, just sitting with the rustling sounds and bird song. Light seems to work differently under the canopy, there’s no rush to illuminate, instead beams wonder through the leaves, aimlessly falling on the trees and across the undergrowth in pools.

These scenes were instantly recalled in 2010 when I stood in the Mt Buangor state forest. The site, which features in many of the paintings in this show, was in the aftermath of a controlled burn with blackened trunks and fallen trees dominating the scene. The reality of Australia’s environment and climate makes bush fires an inevitability during the summer. But the often documented losses caused to humans is at odds with the natural environment. My depictions of the singed landscapes throws a positive spin on the connotations of bush fires, invoking the regeneration which stems from the blaze. New ferns, with resurgent green fronds are scattered amongst the fallen branches, defying the inferno’s wrath.  In some cases, fire is the final ingredient in germination, creating enough heat to trigger the growth of certain native flora. I have tried to shift the gaze away from the images of destruction to the natural serenity and rawness of the bush landscape. 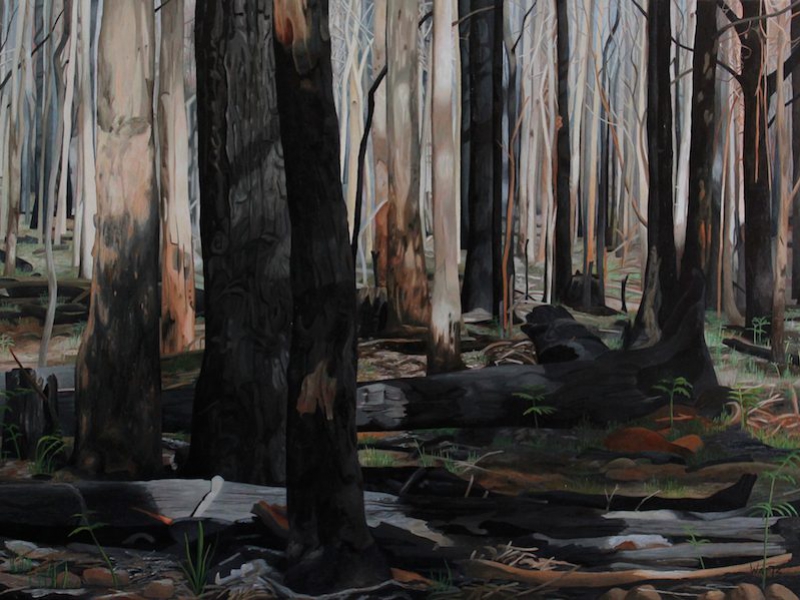